As I finish off my 3rd week here, I’m starting to get find my routine.  Speaking for myself, having a regular ~7 hour sleep schedule is glorious– and a marked improvement from my (unfortunately quite regular among the SWEboard) 5 hour power nap that sustained me last year.  During international orientation, many of my peers remarked that one of the main “culture shocks” is the pace of life in London.  Hmmm, fast paced, you say?  I guess when you’re used to riding a roller coaster, life on the expressway seems rather manageable.

My current routine for Sunday is among my favorite: mass & a museum.

Last week was at St George’s Cathedral in Southwark which was just a 15 minute walk south of my apartment.  I met up with one of my friend’s from UM (who is also studying for a year in London) for the 10am “Family Mass”.  Unlike the congregation at English Martyr’s 9am mass, the crowd was much more diverse:  as Wikipedia confirmed “every Mass is attended by people of different ethnicities and ages ranging from African to Asian to European.”  Perhaps it was more noticeable at this “family mass”, but children were definitely a-plenty. The typical attire was also much nicer– my skirt & dress top were no match for the standard Sunday’s Best.

Going back to what I had said earlier about my enthusiasm for learning about the community through their worship services, this week was an excellent lesson in history.  Here is a summary of some interesting points from the St George’s Visitor’s Guide that I picked up.

Be sure to click on the pictures to see an expanded view and caption.

Now understanding a bit more about their history, these “white glass” windows (with plans to be replaced with stained glass) make a bit more sense. 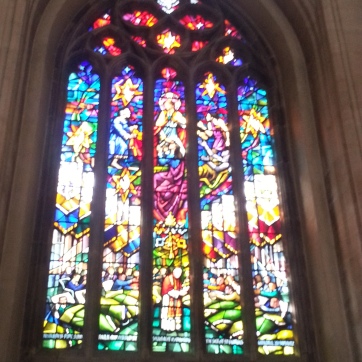 So difficult to capture stained glass! (At least for the amateur photographer.) This window commemorates PJP2’s 1982 visit and Liturgy for the Sick. 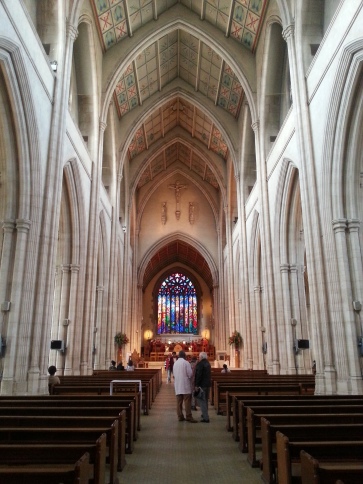 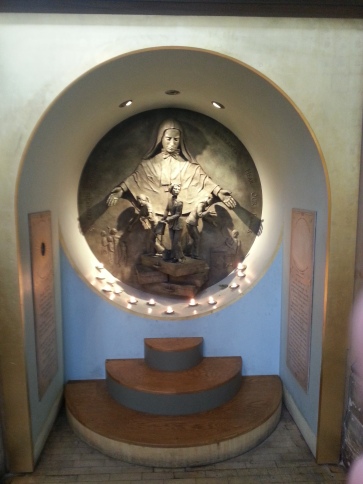 Shrine to St Frances Cabrini, patron saint of migrants, she frequently visited St. George’s on her way from Italy via England to America. (from the visitor’s guide) 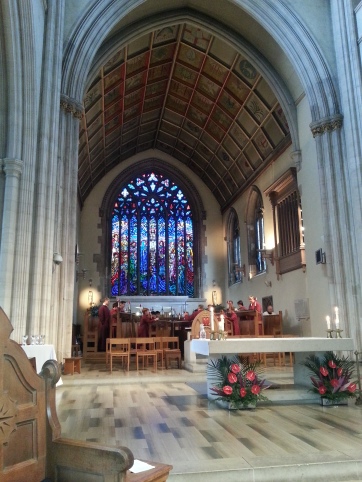 The 10am “choir” was comprised of 6-8 girls in their teens. As we were leaving the church, the 40 person boy’s choir was warming up for the 11:30am mass. How beautiful! I definitely foresee myself coming back here. 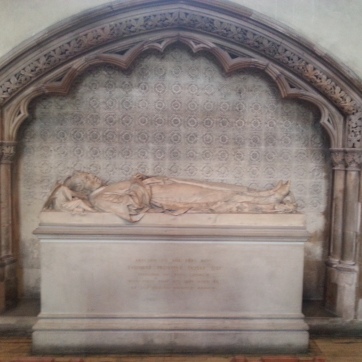 Memorial for Fr Thomas Doyle, founder of the Church. 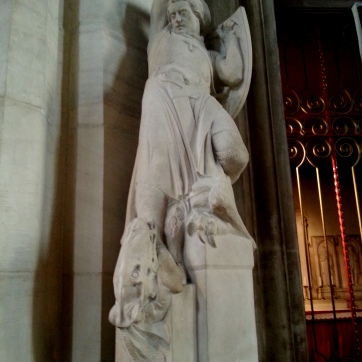 St George slaying the dragon! Since the cathedral bears his name, I was anticipating something more grandiose, but this ~4 foot tall statue was actually kind of hard to find.

The entrance to the Imperial War Museum is just a stone’s throw away from St. George’s.  Upon arrival we received tickets to their current special collection on WWI; good thing that we arrived near the beginning of the day because they were already booking 2 hours in advance (to manage foot traffic).  Any tourist guide that I’ve seen ranks the IWM as one of London’s best attractions, and after visiting, I can definitely see why.

Again, be sure to click on the pictures to see an expanded image with caption. 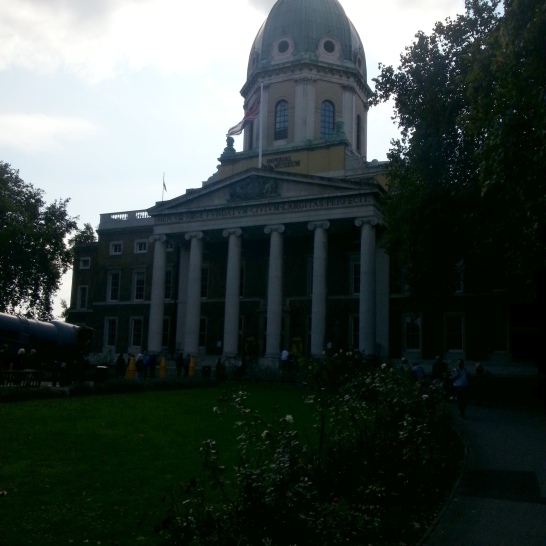 View from the outside of the museum. I’ve had to shift my definition of “beautiful day”– blue skies aren’t very plentiful here, but the sun has a way of making the clouds look absolutely stunning.

Displaying bullet holes in signs is impactful. Using signs for Tube stations that I, and many of the visitors here, have used on a regular basis– jarring. Again, it starts to put things in perspective.

Smile! You’re on the BBC!

Refrain from flash photography while the BBC is filming… Or just climb to the 4th floor for an aerial view.

Another example of making these museums accessible to everyone. This informational video not only contained subtitles, but also sign language.

Example of excellent pedagogy. ” White rabbit was one of the codenames used by Yeo-Thomas. A coded message would by sent to members of the French resistance by the BBC saying, “The White Rabbit is back in his hutch”, meaning he had returned safely home.” 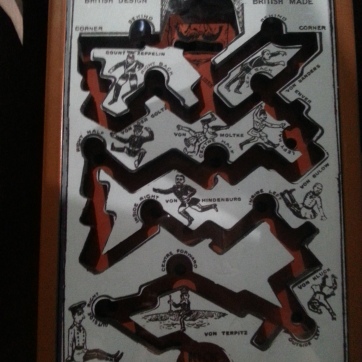 “Play trench football. Tip the table to get the ball through the trenches, avoid the traps, and score a “goal” in the Kaisers mouth. British children learned to support their country and laugh at the enemy through games like this.”

Since “Family Mass” seemed to go well, we decided to give that a go for this week, too– this time at the Brompton Oratory.  This was the most conservative parish of the three that I’ve been to since I’ve arrived. A number of the women I passed on my way in were wearing lace veils; I later learned that the 9 and 11am masses (2 of the 7 masses they say every Sunday) were “1962 Missal” and “Latin High Mass” respectively. Large signs were on the doors requesting that visitors refrain from photographs, but you can view images from their photo gallery on their website.

The 10am “Family Mass” had an unbelievable children’s choir: 5 boys, ~35 girls with a glorious blend (and impressive vowel matching!) that suggested skillful instruction.  There may have been a hymn book for people to pick up on their way into the church, but I must have missed it. It probably wouldn’t have done much good anyway since I’m unfamiliar with the local music and the common hymnal around these parts only has words (no music).  And anyway, the congregation only joined on the opening & closing songs; everything else, including all the mass parts, were sung by the choir. Though I really enjoy singing to participate, being “forced” to just listen provides a unique opportunity that I am very grateful to have had.

The priest focused his homily on this week’s Gospel (click here for the excerpts) which excellently complemented the philosophy reading I have been doing this week on Moral Theory. What is right?  Good?  Just? More on this to come soon!

The Victoria & Albert (V&A) Museum of art & design was literally next door, so a post-mass visit only seemed fitting.

The museum is quite large, so I dedicated this visit to the Medieval and Renaissance wing.  Enjoy a few rounds of Identify Me, similar to Interpret This except there are correct answers this time.

Some of the many representations of St George:

And finally, in honor of the liturgical feast celebrating the Archangels today: 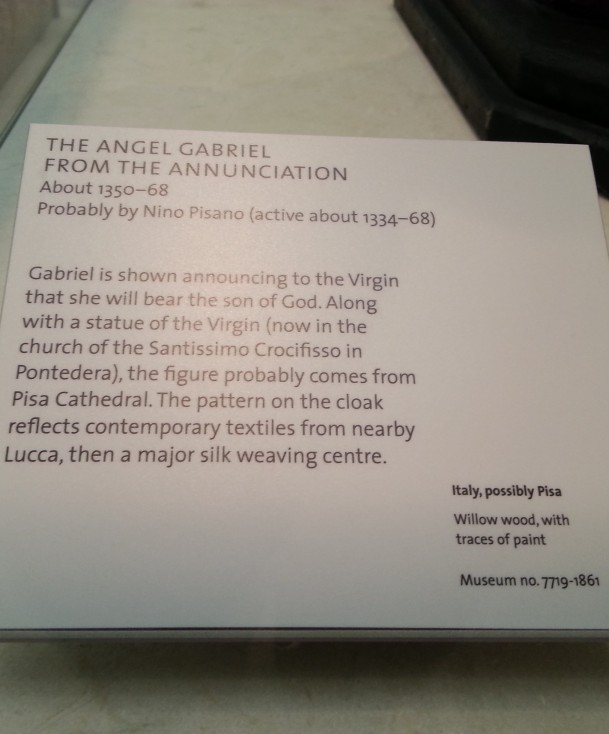 Check out those wing sockets!

Fun fact: September 29 is the feast of St Michael the Archangel.  Termed “Michaelmas” this date falls near the summer equinox each year and, conveniently, the beginning of the academic “fall term”– or as KCL (and other institutions) refer to it, the Michaelmas term. Check out this short Wikipedia article for a bit more info.

View all posts by Andrea